The Network Effect of Social Media Marketing for Asset Managers 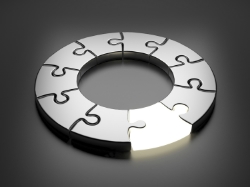 Abstract: Social media marketing helps asset managers to increase the number and frequency of their touch points with clients and prospects.

The reluctance of asset management firms to embrace social media marketing is understandable.

To an asset manager’s marketing department, social media seems at once unfamiliar, yet too personal; faddish, yet culturally entrenched; a source of interest, yet also a regulatory and public relations headache waiting to happen.

Unquestionably, there’s something to these concerns: stories about the ill-advised Facebook post that derailed a career, as well as the insensitive Tweet that harmed a company’s brand and ruined the reputation of the employee who posted it are legion.

Such stories clearly demonstrate the dark side of the three things social media does quite well: connect, amplify, and magnify. In the case of the errant Tweet or compromising Facebook photo, it’s an indiscretion or lack of self-awareness that is magnified.

But social media and social media marketing take advantage of a key investing principal straight from the desk of Warren Buffet: the network effect (outbound link). It allows for an asset manager’s message to be delivered initially across several chosen distribution channels to a targeted audience, who then can subsequently act as a secondary conduit through which that message can be delivered… and so on.

For example, J.P. Morgan Asset Management and Blackrock both use social media platforms to announce new thought leadership pieces, television appearances by its staff, and other investment related items of interest: 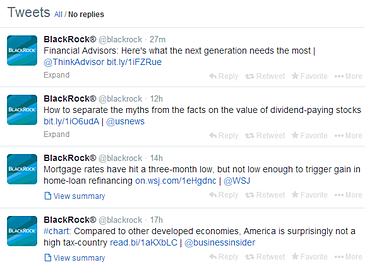 Will each and every person encountering the message care? Of course not, but that is largely irrelevant as any marketing campaign will hit more than just a few dead ends. Social media marketing does, however, allow an asset manager to deliver the message via the correct distribution channel AND target the desired audience in a manner that’s direct, systematic, and consistent.

Social media marketing is just another way a savvy, forward-thinking investment manager can take advantage of the “magic of compounding" by investing in a piece once, and then allowing a firm’s clients and prospects to redistribute the piece again and again and again.

Simply put, social media marketing for asset managers increases the number and frequency of the touch points a firm has with its clients and prospects.